Helmets for sale
Updated: 21-11-2020
Contact me for a purchase or exchange proposal at
warhelmets@gmail.com

US M1 helmet
550 euro
Nice example of a US fixed bale front seam M1 helmet with a low pressure St Clair liner. Liner is slightly damaged but that is also the reason why these rare low pressure liners were taken out of circulation.
550 euro incl worldwide shipping 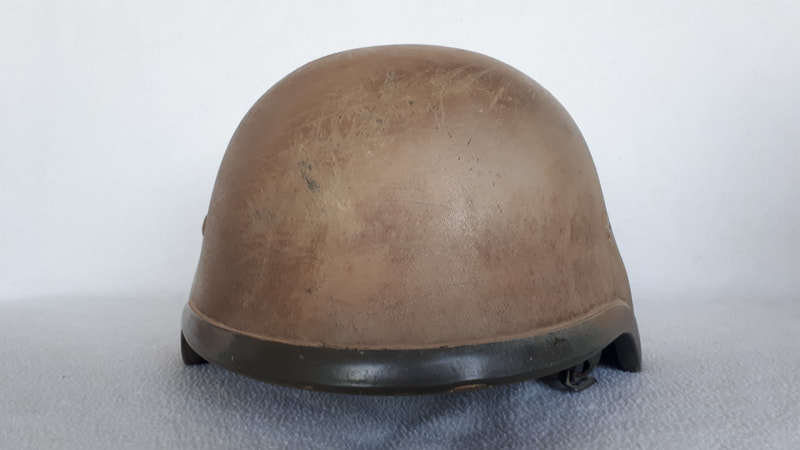 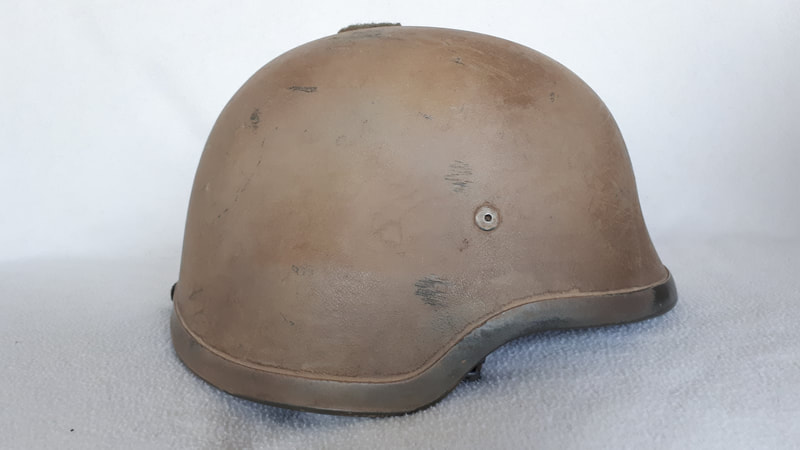 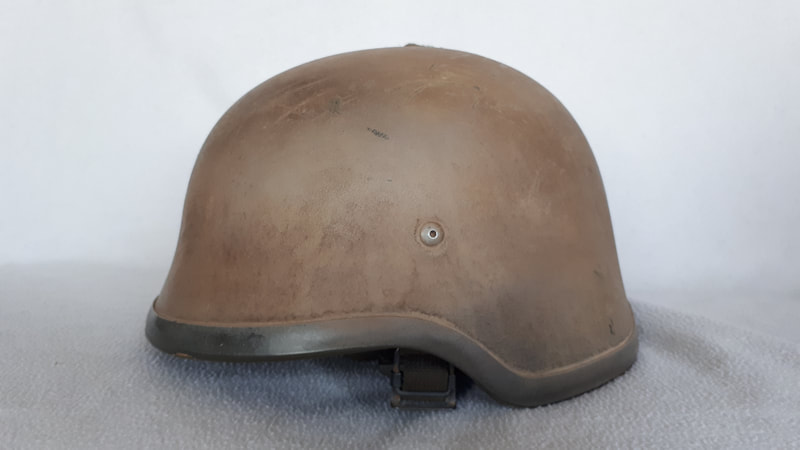 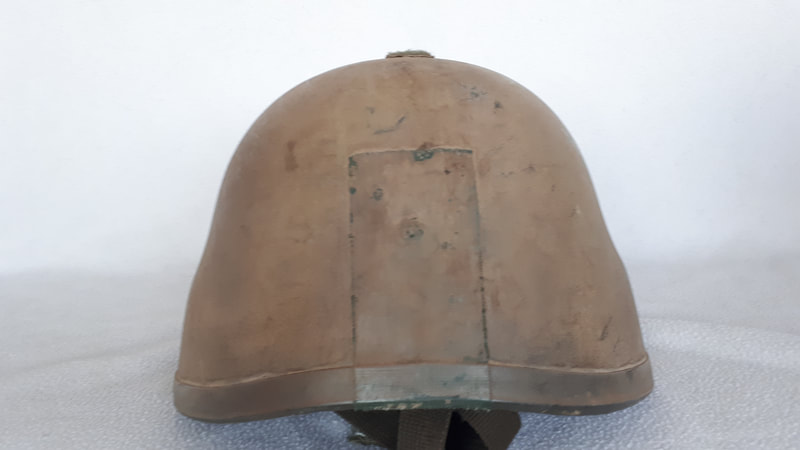 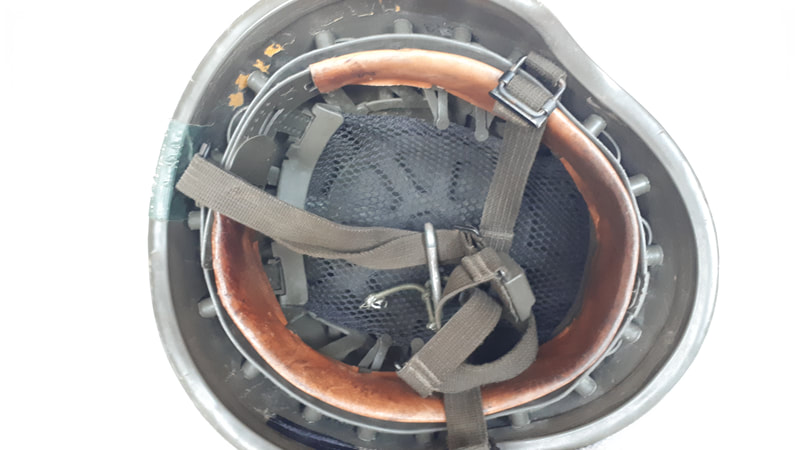 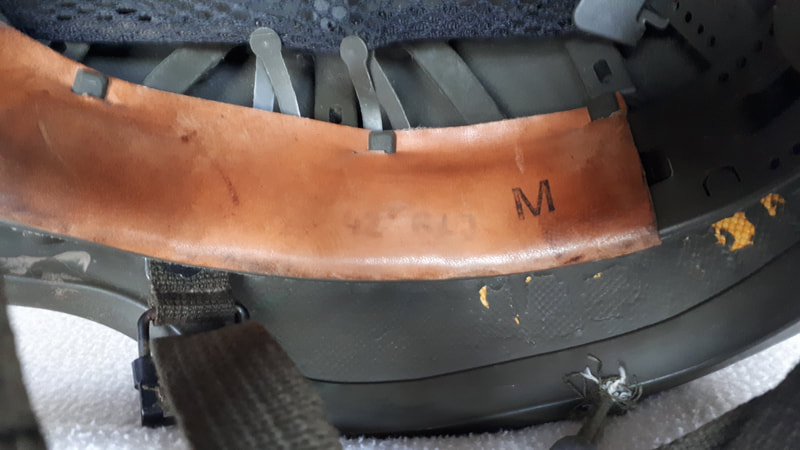 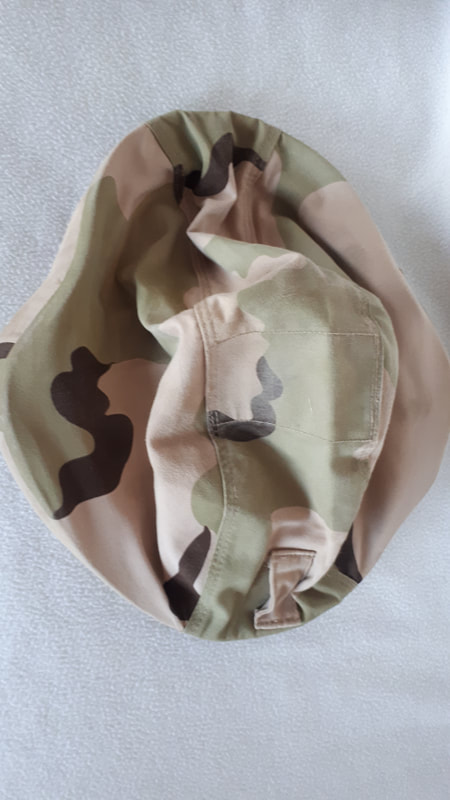 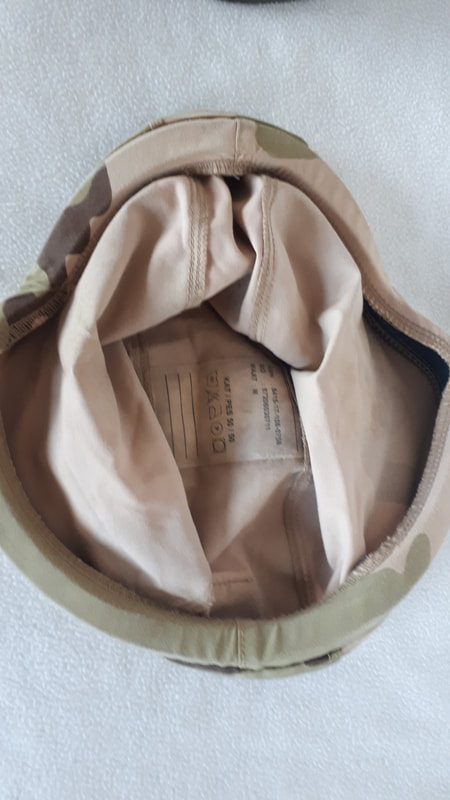 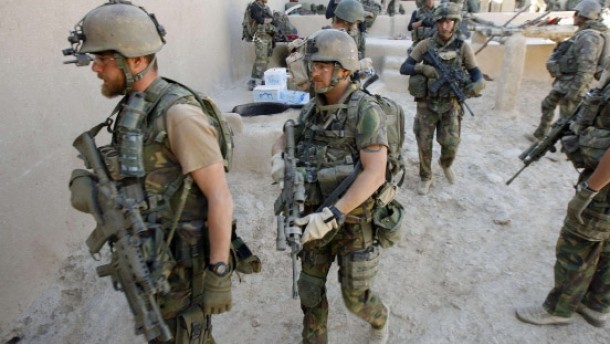 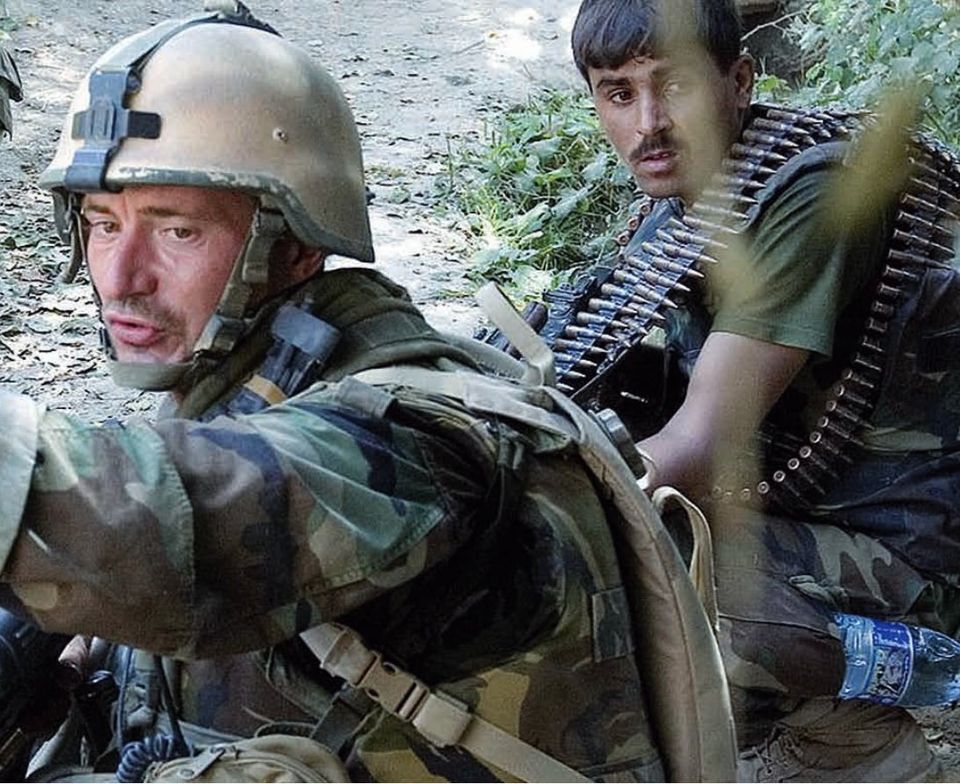 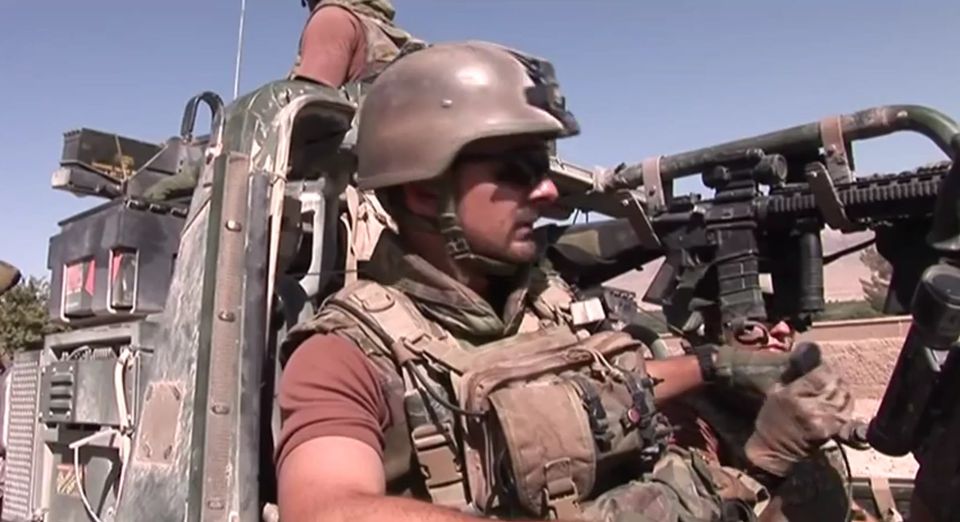 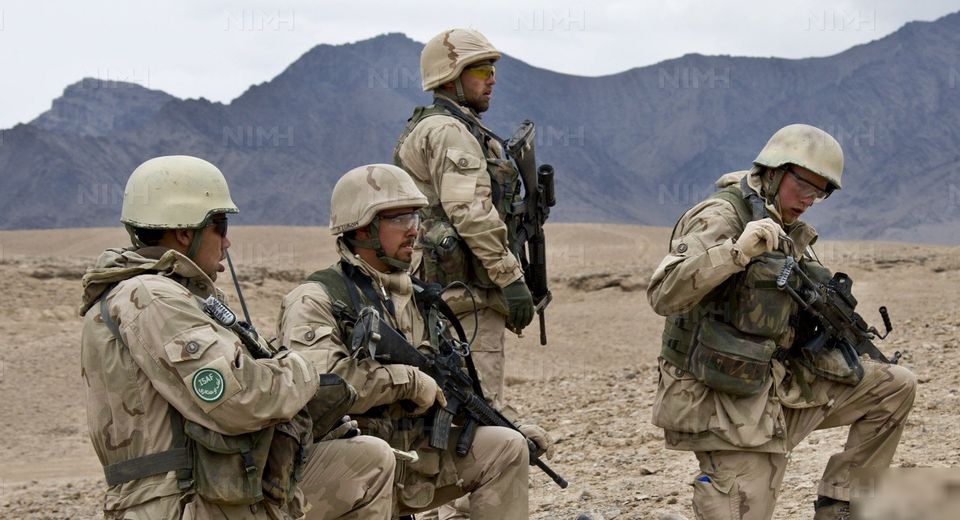 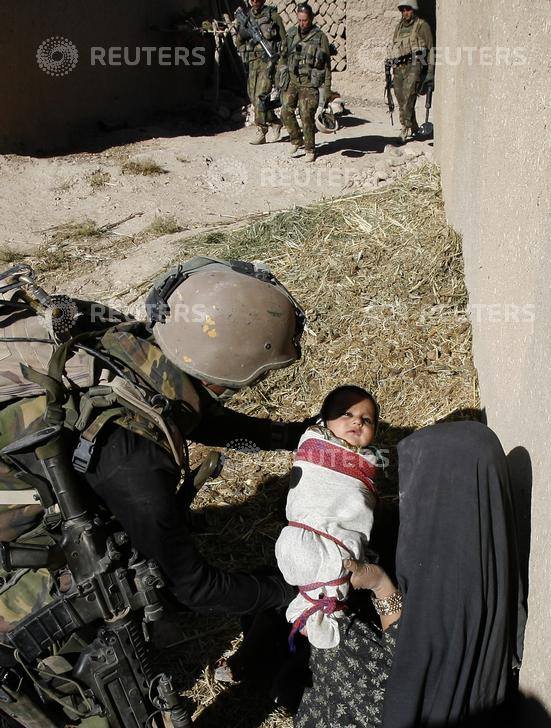 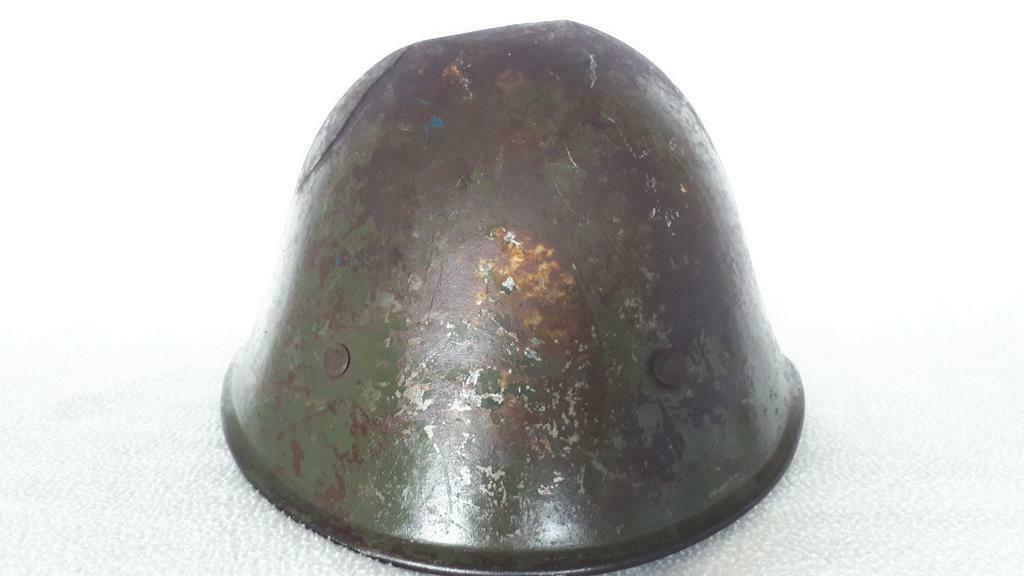 French Gendarmerie helmet
150 euro
Unusual example of a French M.26 with ww1 victory plaque. An army helmet that has been repainted black and used by an adjudant chef Dumaine of the Gendarmerie. A proud ww1 veteran. 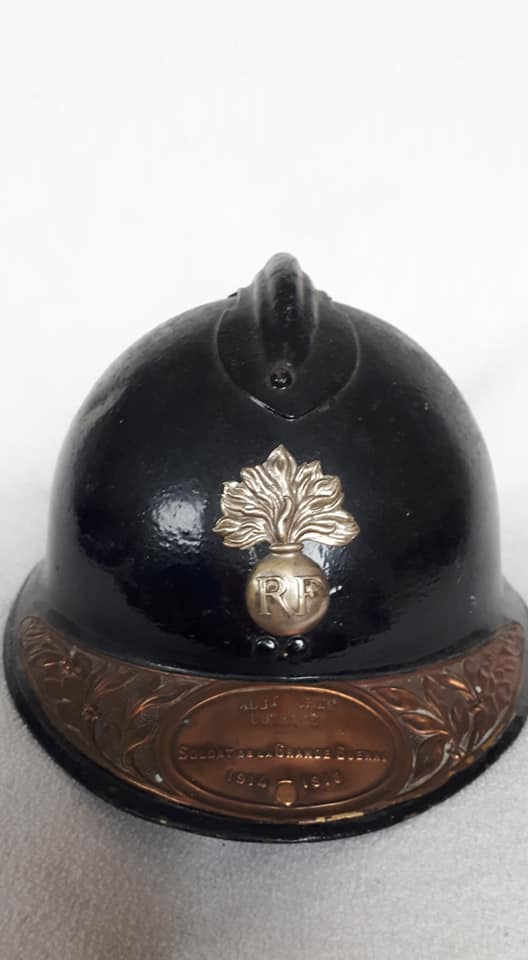 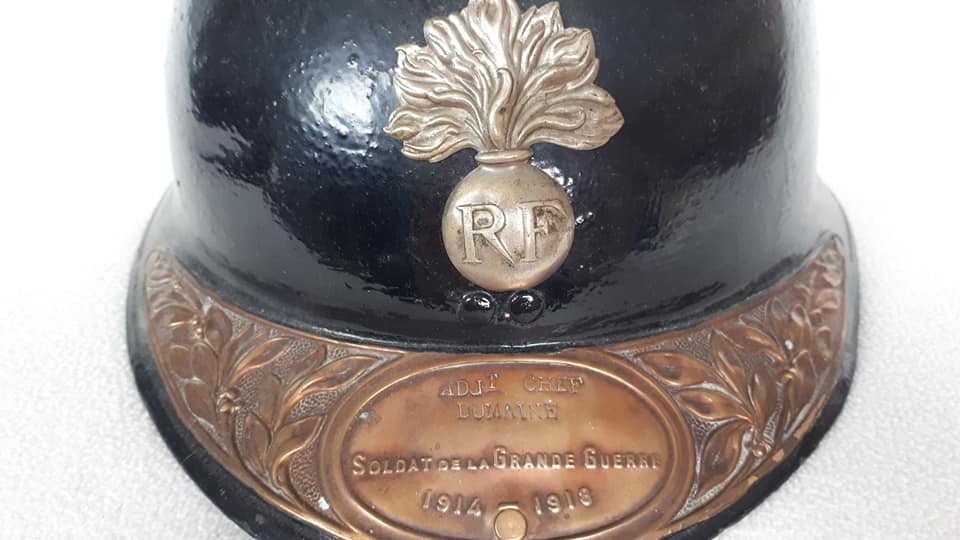 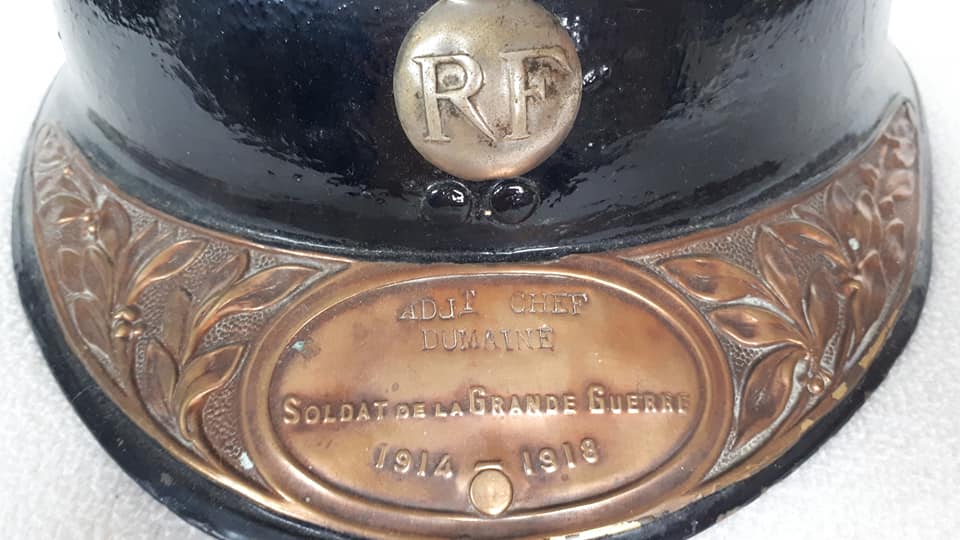 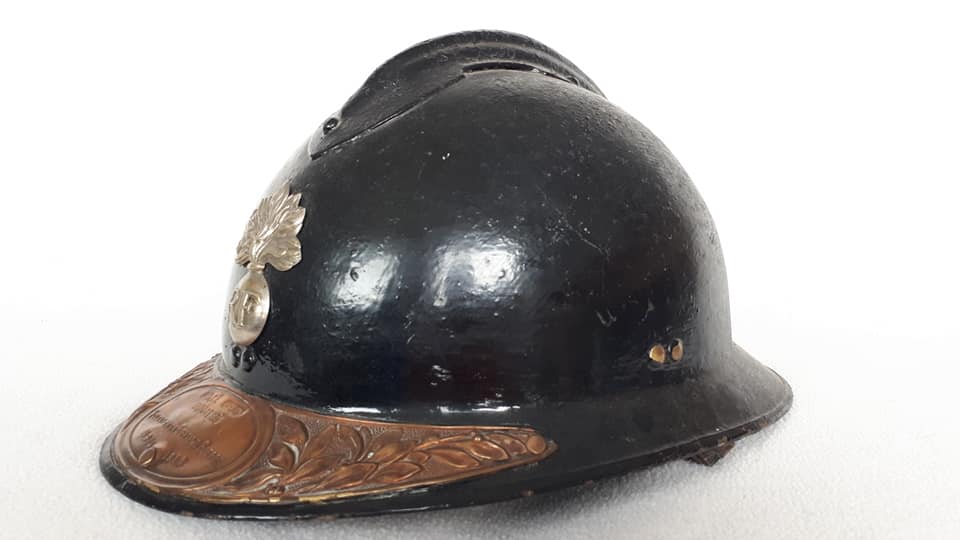 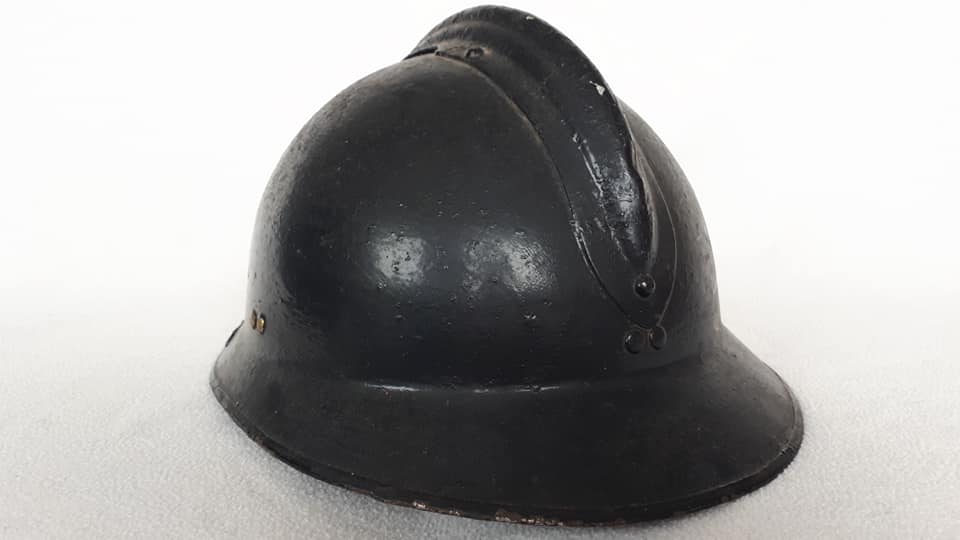 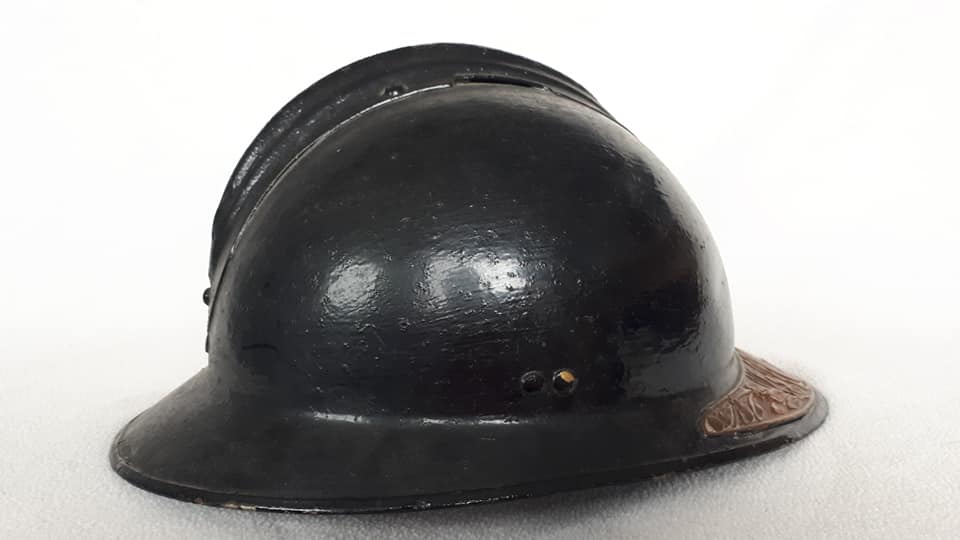 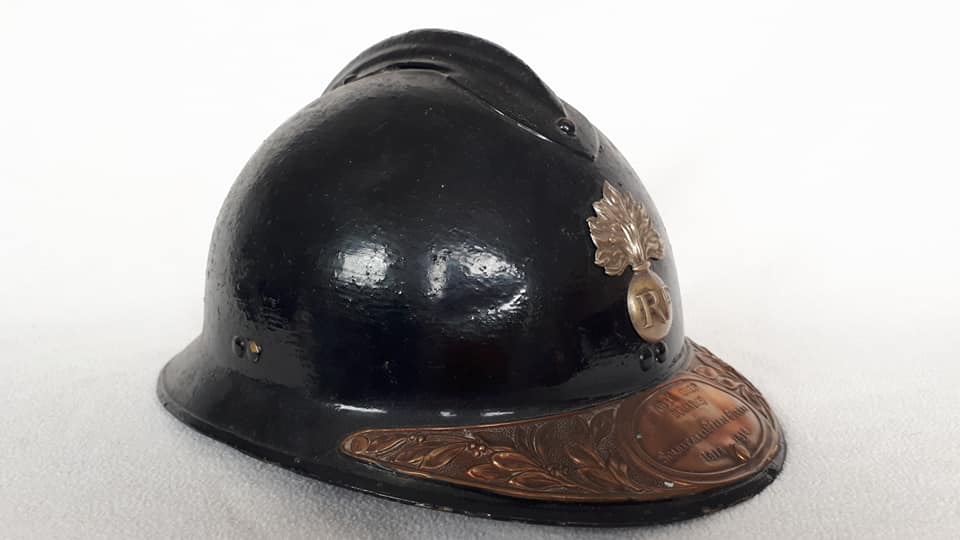 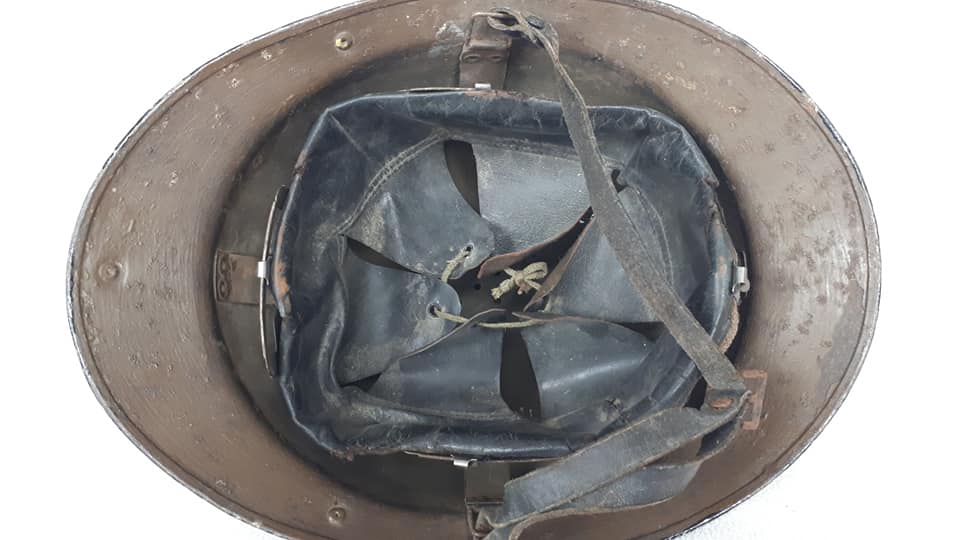 Dutch M.27 helmet
175 euro
Dutch Model 1927 helmet. Repainted black. Used by the police in occupied Holland. With name in the rim on the inside.

French Colonial (North African) helmet
120 euro
As used by the North African forces that fought the Germans in the South of France in 1944 and at the start of the war in 1940.

French M.26 helmet
60 euro
Without liner. Excellent condition. Stamped Japy, size C.
Liner is easily replaced. During 1940 some of these helmets were worn without any emblems.

Belgian M31 helmet
60 euro
For sale or exchange, unusual and interesting variant of the Belgian M.31 helmet. Produced without the characteristic holes on the front for the lion badge. This is an export example and was used during ww2 by the Dutch police forces and airraid protection services. 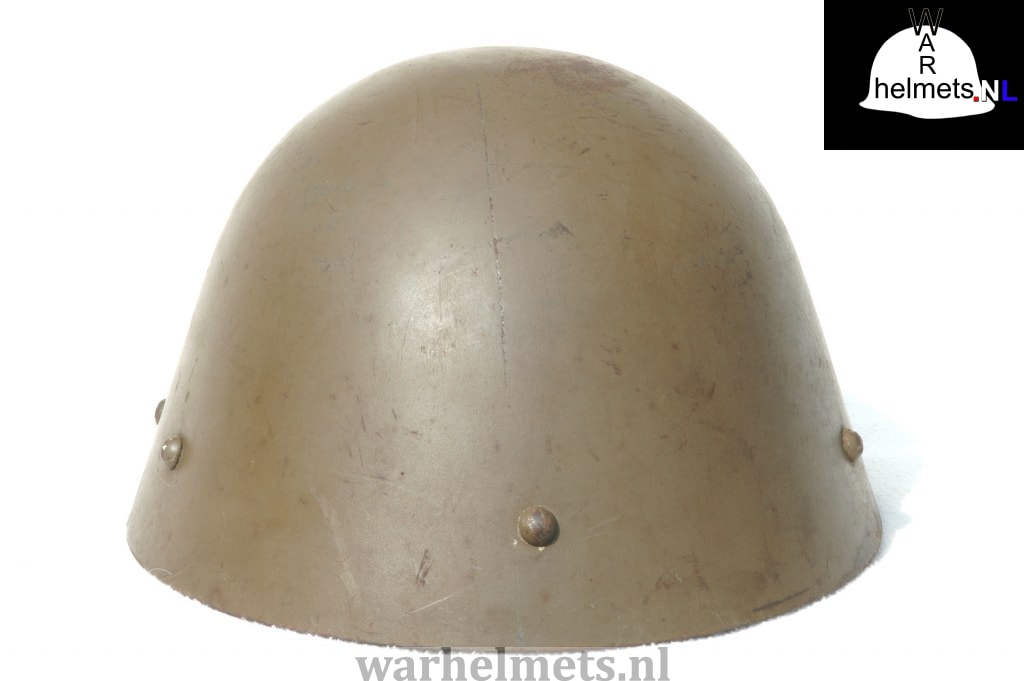 British made copy of the WW2 German Stahlhelm
SOLD
These were used for training purposes. Very hard to come by. I will include photos of period footage that can be seen here:
https://www.youtube.com/watch?v=yeGmpi50hUE 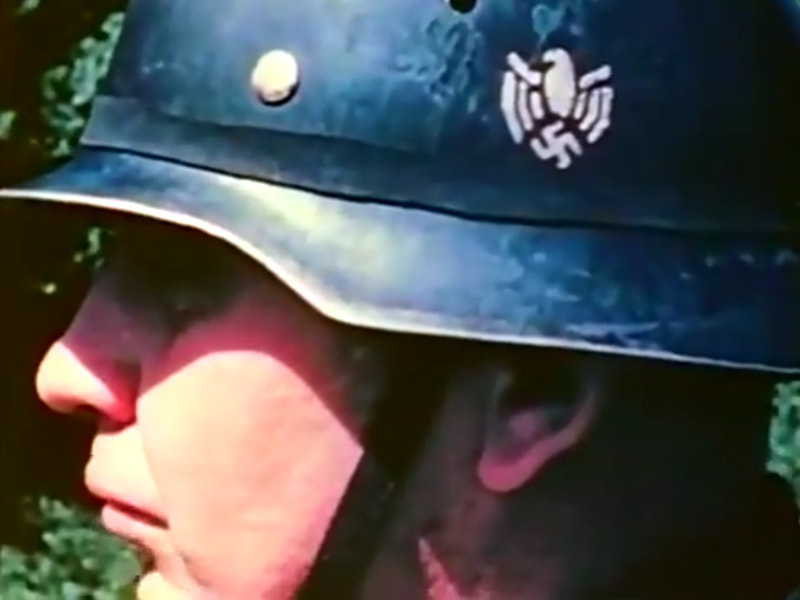 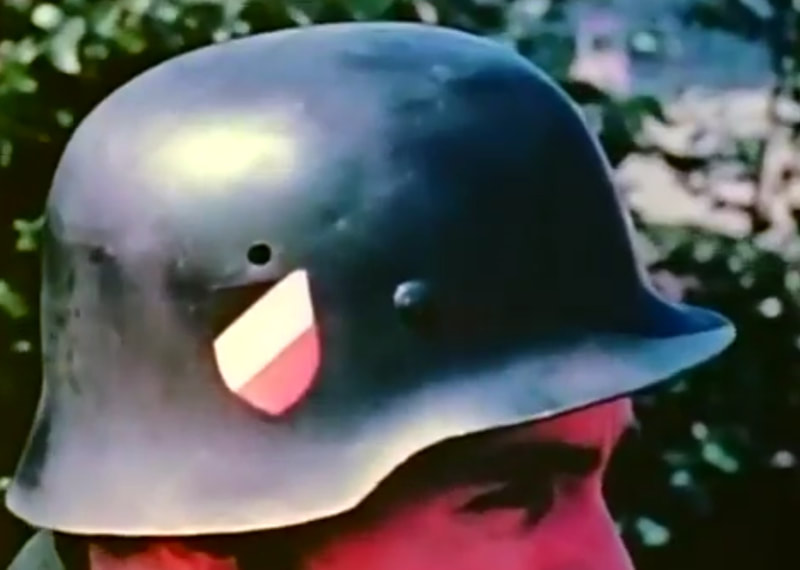 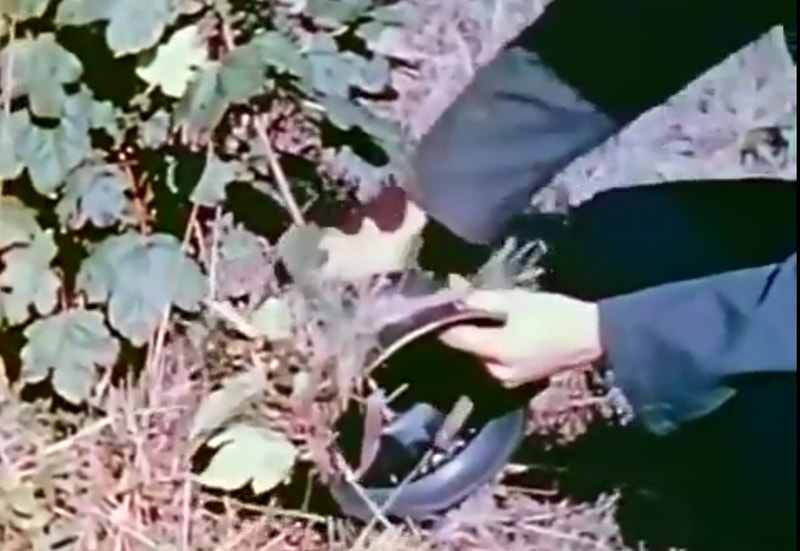 Dutch M.53
SOLD
With original dogtag of the original user

Turkish parade helmet
SOLD
For sale or exchange, Turkish ceremonial helmet, as used by guards at for example the Atta Turk Mausoleum. rare early example from the 60's-70's.

Dutch MILSCO KNIL helmet
SOLD
Milsco KNIL helmet.
As used during WWII by the Dutch forces in the Dutch Indies and New Guinea. This US produced helmet was supplied to the Dutch soldiers because of the occupation of motherland Holland. The Dutch forces consisted of Dutch citizens but also people from the colonies like Surinam and Java. These forces fought a hard battle of guerillia warfare against the Japanese invaders.
This helmet is in decent shape. The harsh tropical condition with high humidity are shown but are also proof this this is an original worn example.

Belgian m.31 helmet
SOLD
Nice condition Belgian M.31 helmet. As used during the invasion of Germany in 1940. With army number stamped on the chinstrap.

Czech M.30 helmet
SOLD
As used by for example the Spanish during the civil war.
Lovely named example.

Belgian M.15 Adrian helmet
SOLD
Belgian ww1 helmet as used during the first world war. Originally from French production the Belgians same as the French used the Adrian helmet as protection in the trenches. This example is in good condition with original paint. It lacks the liner but this can be easily replaced.

Italian M.17 Lipmann helmet
SOLD
Italian ww1 helmet as used during the first world war. The comb has been welded to the shell. This is a variation and a copy of the original French Adrian helmet.

French M.35 helmet
RESERVED
French Model 1935 helmet. As used by motorized and special forces troops during world war 2. Liner is damaged. Also a big hit on the back of the helmet. Combat damage?

Dutch M.16A helmet
SOLD
Dutch M.16A helmet as used in Holland during 1939/1940.
The liner was partially loose so I have fastened it back in the original place so it stays in good condition.

Dutch M.16A helmet
SOLD
As used by the Dutch army during ww2.

Argentinian M38 helmet
SOLD
For sale is this nice Swiss produced helmet which was exported and used by the Argentinian army. An example of a helmet which is not available very often. On the side the National colors. Decal is intact for about 85%.

Dutch M.53 UN
SOLD
As used by the Dutch forces during UN missions.

Italian M.26 pith helmet
SOLD
For sale is this Italian pith helmet. As used in the North African desert during ww2.

Soviet SSH36 helmet
SOLD
This piece was found around St Petersburg. It still has the first type star on the front.
Threated with oxalicacid to revive some of the green paint.

Hungarian M38
SOLD
For sale is a Hungarian m.38 helmet with original wartime factory liner. This helmet is stamped MAVAG with size 64. It is easy to find these helmets in refurbished condition but not in original wartime configuration.

Dutch M34 helmet
SOLD
For sale is this Dutch army helmet with lion plate. Can't be missed in any helmet collection. In nice complete condition.

Indian ww2 Turban
(as sold without the head)
SOLD
Indian soldier turban (Punjabi/ Musulman) active in the British army during ww2. Khulla is commonwealth stamped and dated. Pagri is original Indian cloth. (head not included). The turban can and will be shipped wrapped as shown.
https://www.youtube.com/watch?v=eaeEQ5kAu90

A Dutch M34 helmet. Originally an army helmet in green version. During the occupation reissued as a police helmet and even later as state police helmet (rijkspolitie). Has a very early dated interior inside. A pretty specimen with a long service life.

MKII helmet
SOLD
British Mark II helmet. Shell is dated 1939 Rubery Owen & Co. Ltd. The liner is dated 1949. It is double named on the chinstrap and has an unknown flash on the outside. Originally sourced from Germany.

German M.18 Transitional helmet
SOLD
For Sale is this German M.18 Transitional helmet. A reissued piece that started it's life as a world war 1 helmet and continued it's service into world war 2. The decal is partially visible.
450 euro takes it excl. shipping. Paypal (add 4% or friends and family) or bank transfer. I consider trades/ partial trades, only helmets.
Army helmets, ww2 and earlier

German M40 Luftwaffe helmet
SOLD
For Sale is this Quist German M.40 Luftwaffe helmet. A nice reissue with the second type decal on the side with a slight misapplication of the swastika. On the side the veteran who picked this shell up has carved his name in the shell.

Dutch Special forces Rabintex 303AU helmet
SOLD
Very cool and rare Dutch Special Forces (Korps Commandotroepen) helmet. Used in Afghanistan. Early dated example. In 2016 the Korps Commandotroepen received the highest order for their battles in Afghanistan. With alot of firefights these elite men proof themselves to be one of the best men in the Dutch armed forces. Helmet for sale only.

Dutch based on model KNIL
Sold

Iraqi M90 helmet
SOLD
For sale. Nice Iraqi M90 helmet. Used during both Gulf wars. Chinstrap has been reinforced by ducktape in the field by the soldier.

A rare ceremonial helmet that was used by the Afghan army in the 50's-60's.

MK III with emblem
Sold
Interesting MKIII helmet, used by the British and Canadian forces during the liberation of West Europe. The origination of the flash is unknown. (interesting research project?)

British helmet reissued by Greece, dated 1941
SOLD
For sale or exchange.
British produced helmet that was used during and after the war by the Greek army. The brown oilcloth liner is typically Greek production.

French M26 helmet
SOLD
For sale or exchange. French helmet m26. As used by the French forces during 1940. Nice piece with the infantry emblem on the front. Good solid piece that still has the original factory paint and the maker mark is visible on the inside. A liner for this helmet can be easily found and replaced.